If you're a musician who likes to learn new songs and techniques by listening to the same piece of music over and over but wish that the music could be played a little slower, then you'll enjoy Amazing Slow Downer for Android.
You can repeat any section of the music at full speed, slow it down or even speed it up by changing the speed between 25% (1/4 of original speed) and 200% (double speed) without changing the pitch!
Change the tuning or musical key? No problem, Amazing Slow Downer handles that as well.
Setup seamless loops by touching the 'Set' buttons during playback.
Amazing Slow Downer is the ideal tool for an musician, transcriber or dancer wanting to improve their skills.
Requires Android 4.0.3 or better and a processor with support for the NEON instruction set (some older devices will not work).
Price: $9.95 US

Are you interested in music? Do you want to learn new songs but wish it could be slowed down? In this article, you will know about the free apps to slow down the music on your phone. Programs for slowing down music can be divided into those that are full-fledged audio editors, allowing you to make different changes to the song and even compose music, and those that are only intended to slow the song. The following article will tell you about the free apps which will slow down the speed of the audio file.

List of Free Apps to Slow Down the Music

Want to play music eve without wifi?
Check out our top picks for the best music apps without wifi

Lapis Apps offers Audipo application. It is available for both iPhone and Android users for free. Audipo is a music player using which you can change the playback speed of an audio file in real-time. It can change audio speed without pitch shifting. Advanced audio control is designed for long audio tracks. It includes multiple seek bars and audio marking feature. Put marks anywhere in your audio track and play the audio from the position where you marked repeatedly. Also, you can name the mark.

M-Apps offers Music Speed Changer Lite application. It is available for both iPhone and Android users for free. Music Speed Changer Lite app is one of the free apps designed specifically to slow down the music. You can change audio tempo or speed and pitch in realtime quick and easy. Just select an audio file, mark the region you want to play or loop or repeat and change tempo and pitch on the fly. Some of its features are loop region, select region, a frequency filter, pitch change, removal of voice from musical composition, and import various formats.

Single Minded Productions, LLC brings you Music Speed Changer application. It is available for Android users only. This app is free. With this app, you can change the pitch and speed of the audio file independently in real-time. It utilizes professional quality time stretching and pitch shift engine and has better sound quality than all other similar apps.

With its advanced looping feature, you can move the loop to the next or previous measure or set of measures with the touch of a button after the perfect loop is captured. Other features include light and dark themes, 8-band graphic equalizer, reverse music, preamp, and balance control. 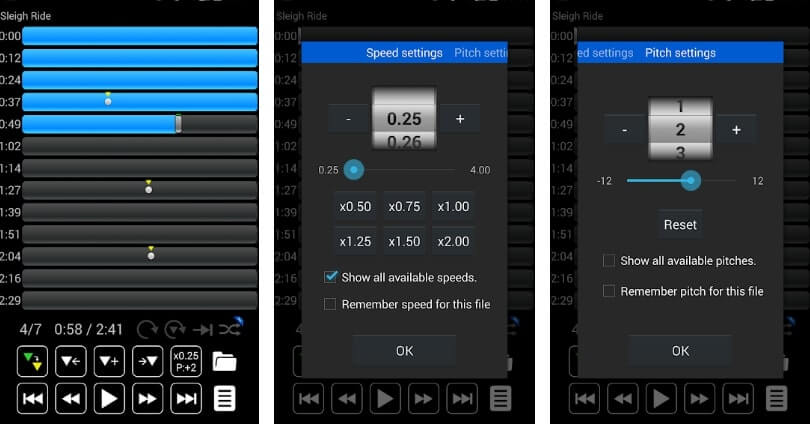 brAzzi Labs offers Riff Studio application. It is available for Android users only. This app is free. It provides high-quality time stretching and pitch shifting, back-ported to support older Android versions. Using A-B looper, you can mark a section of the song to loop indefinitely and practice the hard parts. One of the functions of the program is to change the tempo of the music. This does not affect the sound of the song.

Hipxel brings you Music Speed Change app. It is developed mainly for Android users and is available for free. You can change the tempo of track in the range 4x slower to 4x faster and set Pitch Octaves Change between -1 and +1. There are two modes of changing Tempo & Pitch – slider (fast) / pad (accurate). If you select a .wav file, then music plays instantly. For other audio formats, sound must be prepared for optimized playing. It usually takes a few seconds for a normal-length track on new & fast devices. It does not change your original audio files.

TimePitch – Song Pitch and Speed Changer is an app built specifically for iPhone users. It is a free app. TimePitch music player app allows you to change the pitch and tempo of your songs. Select songs from your Music Library and use the Pitch and Tempo sliders to your desired liking. Languages supported are English, French, German, Japanese, Korean, Portuguese, Russian, Simplified Chinese, Spanish, Traditional Chinese, and Turkish.

Voice Pitch and Tempo Changer is one of the free apps to slow down the music. It is compatible with iPhone, iPad, and iPod touch. Slowing or speeding up the music are the main functions of the application. It is very similar to TimePitch app. Adjust the tempo and pitch sliders, record all the edited songs for later use and share it on social media.

Music Practice is developed for iPhone users only. It is so simple that even a beginner can work with it. It is a free app. The key features of this app are tempo shifting, pitch shifting, equalization, reverb, delay, and looping audio sections. It has a nice fluid user interface with an elegant music player.

SpeedPitch is one of the free apps to slow down the music. It is compatible with iPhone, iPad, and iPod touch. It is a free app. Load a song from your iPod library and learn a song by ear is to practice over again. It has pitch and speed sliders. You can change song speed (0% – 200%) without any change in pitch. And change song pitch (-1 octave to +1 octave) without any change in speed.